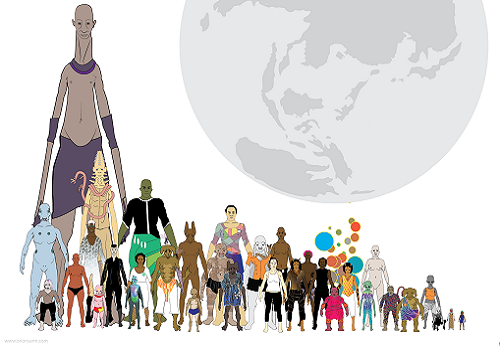 Over the next ten thousand years Terragen civilization (the sum of all races and cultures which trace their history back to planet Earth, or Terra) saw the diversification of humanity into a myriad new forms; and the original, or baseline, human form became almost extinct. In addition, thousands of new biological beings, genetically engineered from animal ancestors or forged without ancestor or precedent using neogenesis (the creation of life from lifeless raw materials) took their place next to their baseline-descended progenitors.

Gengineering: The development and application of scientific methods, procedures, and technologies that permit direct manipulation of genetic material in order to alter the hereditary traits of a cell, organism, or population.

Rianth: Humans who have incorporated animal genome. Unlike the splices, who have often had a history of domestication and service employment, rianth clades have typically had complete autonomy since their origin and were never slaves.

Superior/Su: A genetically modified human, characterized by capacities far in excess of baselines.

A clade is any group of intelligent beings united by common descent and physical and mental similarities. Baseline humans, originally a rather homogeneous species, began to diversify into such subgroups as early as the Interplanetary age, specializing or adapting themselves and their descendants as they expanded beyond the bounds of Old Earth. Not long after their creation other Terragen groups capable of reproduction, from ai to provolve to vec, followed suit, diversifying and reinventing themselves into new clades, or inventing entirely new kinds of being that eventually diversified into new clades as well. Here is just a sample:

Enhanced Dolphins: Provolves based on Terran dolphins; the first provolves after the chimpanzees, and a sign that provolution technologies had come into their own.

Grays: Human nearbaselines modified to duplicate the alien humanoids of some early 1st century AT stories.

Hectonitheres: Bioborgs, based on shared consciousness among thirty to a hundred or more bodies of hominid and occasionally non-hominid design.

Keruing: Provolves/neogens who are essentially tree seeds, and sprout at the end of their life cycle.

Mirrored Owls: Neogen cyborgs whose minds are based on swarms of subsophont life forms that are designed to dwell in the clouds of Jovian planets.

Polarizers: Nanoborg cyborgs who look like glowing hovering balls of light and have thought processes that are entirely encrypted.


To learn more about the diverse inhabitants of Terragen civilization, click HERE.

Our hosts in the Secharia system took us to the Bluesky Arrival day celebrations on Hiresia; they told us little about the citizens of this world, apart from the fact that they were an ancient race of cybertweaks from the early days of the Original Solar System, and that we might find them surprising when we got to know them.

Beneath the sparkling blue membrane of the overall worldhouse roof, we stood among the tall, multicoloured humanoid and serpentine cybertweaks as they sang the praises of the Lady Bluesky.

A huge image of her was projected in front of an ancient, shabby habitat; before her arrival all the inhabitants of the system huddled in this one airtight structure.

"That is an unusual image of the Lady, is it not?" I asked my host, a tall palefaced Sesharian humanoid called Harpaul.
"Indeed, she was a human then, long before she ascended; it was a very long time ago. Come with us, we would show you our parklands."

He strode off with his long legs, accompanied by Ajaana, his lifepartner, who slithered on her snakelike belly beside him. We skipped along in the low gravity behind them as best we could.

After a kilometer or two we came to a large area of concrete with several hundred Secharians standing motionless in rows, all facing a beautiful green recreational area with full grown trees, paths and ornamental hedges. I realised with a start that the motionless figures each had nothing but a hollow space where the face should be.
I turned to Harpaul, and he opened the hood of his cybersuit to reveal a tiny body and legs, his small hands gripping the edge of his hood as he leapt down onto the ground and ran off into the distance.

Ajaana shouted, "Come on, before the wading pool gets too full!" and did the same. I could now see that the greensward was full of tiny homunculi, running with their own legs beneath the artificial sky.

The huge powerful bodies they wore for formal occasions and vacuum excursions stood passively by in the parking lot.