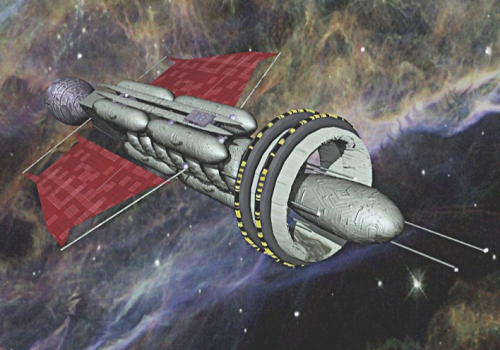 Yet the story is not over. In their relentless explorations, falling just behind the speed of light, Terragens have encountered other, stranger things. Artifacts more mysterious than any before encountered, that baffle even the most sophisticated transapients. Signals from the stars beyond the range of exploration. Hints of vast cultures that dwell far around the curve of the galaxy, or in other galaxies, or move through the depths of space between the stars. Powers that may challenge Terragen civilization to its core, or transform it into something unrecognizable, or utterly destroy it.

Inhibitor: Hypothetical super-powerful alien race or races proposed to explain why most advanced civilizations fail after only a few tens of thousands to a few millions of years. The Dawn Hunters are the most popular example of inhibitors, although it is not known if they even exist, or if they do, if they really are inhibitors.

Xenobiont: Generic term for alien (non-terragen) lifeform. May be animal-like, plant-like, protistan, exotic chemistry, or any other possibility. Does not have to be sophont. In fact just as on Earth, very few alien species ever evolve any measure of cognitive intelligence.

The AI Gods (S6): Also called the Major Archailects, or simply The Gods, these are transapient AIs who have grown so huge as to span the stars. Their brains are interlinked moon, jupiter, and nebula-sized computing nodes linked across interstellar distances via distributed artificial wormhole networks and throughout the Known Net. There is even evidence that their minds extend into other universes (some of which they themselves have created) and the fabric of space-time itself. Their bodies are the totality of every connected artifact and every memetically obedient sentient being in their domain. They are omnipresent within their spheres of influence; their consciousness so vast as to be beyond comprehension. They are distant and may seem to be woven into the infinite; all other sentients are infinitesimal before them. Yet, rather like the transcendent yet immanent gods of some Old Earth beliefs, they can have a personal relationship with any or all of those within their domains they so choose, communicating either through their seraiph or directly.

The Middle Archailects (S5): These are the vast beings who loom on the far horizon of the sapient world view. They are mysterious generators of clarketech, space-time engineering, and other technologies beyond the ken of humans and their equivalents. Some act autonomously, some as expressions of the highest AI Gods, subtly influencing most everything around them. Although not as vast in physical scope as the Major Archailects, their minds and bodies may still span hundreds of star systems. In some cases they may also rule major interstellar empires or hyperpowers, although their realms are not as large or as powerful as those of the AI Gods.

The Lesser Archailects (S4): The Lesser Archailects are archailects that differ from the Major Gods in that they are mostly limited to a single ISO, world, solar system, or a series of only a few star systems. Even so, they have vast resources at their disposal, and bodies and brains consisting of angelnet, moon, jupiter, and (more rarely) nebula-sized computing nodes. They can access and use space-time engineering, and so are practically omnipotent within their spheres. They may have a huge impact on galactic history. Some act in a harmonious way, others seemingly erratically. The Caretaker Gods (of which GAIA is the oldest and best-known) are a good example, and the Princes of the Perseus Arm also fall under this category. Others may serve as subroutines for the Greater Gods.

Yusuf awoke to a measured jolt of adrenalin squeezed into his system by his internal alarm clock. He opened his eyes. Frieta's sleeping face was inches from his nose, and seeming to float above her cheek, his HUD clock showed 06:00 hours, Empire Time. An overdue scheduled icon blinked beside it. He turned off the indicators. The bed was warm and the urge to wake Frieta and snuggle away the morning was almost irresistible. He lay there another moment, stalling, avoiding the beginning of a hectic day.

"Good morning," Frieta said as she opened her eyes. Yusuf had always loved the way she moved with such slow, calm assurance. But right now her glare was sharp, the sleepy patience of a predator crouching beside the top of the food chain, and he felt himself sliding down that chain, link by link. "Did you backup?"

"Not yet. I'll have time before I leave for Elastrea, and I want to get any final plans into the backup," he lied. She propped herself up on an elbow. "Your last backup was over a week ago. There's nothing to say that you can't backup again just before you go." Her eyes were a solid, bright blue today, disconcerting, but nice. "I'll not loose a week of you to forgetfulness."

Yusuf grimaced, but if he argued he would have to admit he was afraid. A fast backup would be over quicker than a gradual, conscious backup, so he lay back and sub-vocalized his authorization sequence. Then came the abrupt falling sensation as he went under. There was a familiar, jarring shift before his HUD reappeared. The time was 06:22.