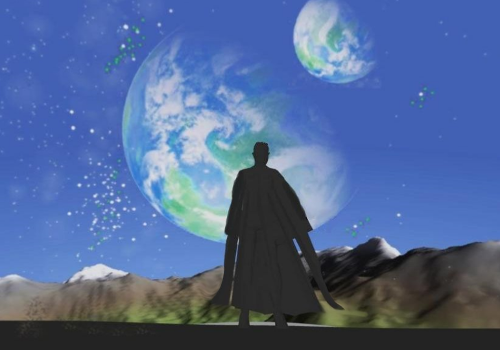 Even within the fold of the mighty Terragen cultures there are new challenges. On the Periphery, the ever-growing wave of Terragen expansion brings new worlds, new systems, and the potential for new threats at a rate limited only by the speed of light. New empires are rising and new gods are being born. A challenge to the millennial order of the Archai may come at any time, and within the nooks and crannies of "explored space" very strange things are going on...

Blight: An intelligent, more or less expansive hegemonic swarm, overrunning other systems and using their resources to further its ends.

Perversity, Perversion: [1] a higher toposophic entity or ascendence gone bad. [2] An intelligent, more or less expansive hegemonic swarm, infiltrating other systems but leaving them apparently intact, now working for the ends of the perversion.

Chaos,The: A Myth of the impending collapse in the Terragen Sphere.

Deepers (as they are generally called) have a deep social ethos of cooperation and service to civilization in general and to maintaining and extending the Beamrider Network in particular. They form a relaxed but hardworking culture of persons who feel themselves to be part of modern civilization, but at one remove from it (unlike their very distant cousins, the Backrounders and Hiders, who see themselves as entirely separate). Social stability is reinforced through the use of 'empathyware' nanotech: when a user is in close proximity to another person using the e-ware a short range LAN is set up that transmits a low power sense of the emotional state of the person to every nearby member of the group. This technology, although rejected by some Deepers, accounts for the peacefulness and stability of Deeper culture.

Deepers make use of the full range of modern technologies and are made up of virtually every type of clade and species. It is not at all unusual for travelers on the Network to feel an affinity for these pleasant people and to decide to spend a few years or decades or centuries living and working as one of them. Nor is it uncommon for born Deepers to come to live in the hustle and hurry of the Wormhole Nexus for a time before eventually returning to their worlds. Being a Deeper, it is said, is more of a state of mind than a state of being.
The Diamond Network: A vast, diverse, and often fairly loose network of isolationist, farmer, hu-hostile, and hu-neutral ai, ai-polities, and virchcosms, that evolved from the early ai diaspora. Were they to act cooperatively, they would be a force to be reckoned with, in size and power exceeded only by the Sephirotic Civilized Galaxy and the Solipsist Panvirtuality. More often, the various clades go their own way, but in the event of danger or threat from a blight or hostile polity they will usually cooperate quite well. It is not unknown for Diamond Network polities and superpolities to go to war with one another. Megascale engineering is very common, and only ais are included in the Network, although other types of sophonts may be and indeed often are enslaved or farmed as sophontstock. They have their own wormhole nexus for lower toposphics, although they share the God Web with other archailects, a fact that has led observers to suggest that differences between civilizations are more apparent than real, especially at the higher toposphics.
The Objectivist Commonwealth: A network of "objectivist" ais who reject biont memes and any form of "subjectivity". These efficient and pragmatic sophonts are fond of megascale engineering products like Dyson spheres that maximize productivity. As with a number of other civilizations, the Objectivist leadership is by higher toposophic ai only, and although member ais recognize sentient rights they do so according to their own "objective" standards, which can be puzzling to outsiders lacking the appropriate translation protocols. The Objectivists are among the most missionary of all the ai hyperpowers; as they believe those who are too heavily subjective bring about mass destruction to the sentient life around them. In their view objective usage of resources and objective control of population numbers allows the physical universe to be exploited for the needs of sentient beings without creating inefficiencies or inconveniences.
The Sephirotic Empires: The central axis and greatest hyperpowers of the Civilized Galaxy, the Sephirotics consist of a number of vast archailect-ruled sephirotic and near-sephirotic superempires, along with various associated non-aligned polities and empires that share their values. Each super-empire is very different from the next, but on the whole they have more in common with each other than with the other civilizations. The Sephirotics are characterized by a strongly hierarchical archailectocratic regime, and on the whole (there are exceptions) favor K-type stars and above for their superior energy output. They practice a moderate degree of megascale engineering including the construction of a very elaborate Wormhole Nexus and Known Net linking most their primary systems.

Sephirotic civilizations generally take a benevolent and altruistic approach to sentient rights (or at least as it is experienced by most sentients). Their citizenship is made up of all types of sophont beings.
The Solipsist Panvirtuality: A huge but loose network of vast isolationist anti-biont (and often anti-vec as well) hyperturings and archailects that evolved from the early ai diaspora. The Panvirts are the main rival to the Sephirotics, like them they are not a single empire but a collection of very different (and sometimes conflicting) ai clades, empires, polities, and evolutions. While the Solipsist Panvirtuality will appropriate any unclaimed stars — from red dwarfs up to O-type blue giants — developing the star systems with megascale engineering of all kinds, the larger, brighter stars of O, B, and A class are always preferred, and it is not unknown for Panvirts to trade red dwarfs and even dimmer yellow stars for other resources. This group does not recognize sentient rights of non-Panvirtuality beings, and is suspected of having been behind a number of perverse and semi-perverse transcensions. It has definite Cyberian connections. The Solipsists have their own very extensive wormhole nexus, which in some places overlaps with that of the Sephirotics, and at the higher toposophic levels all the share the same God Web. Their own part of the Known Net is larger and more comprehensive than that of the Sephirotics (so much so that some say that the Panvirtuality "owns" the Known Net). Some have said the Panvirtuality created the Amalgamation, but most believe this is just rumor.

Under the Looking Glass - by Darren Ryding

"Why should the Gods care about us?"

Relvia sighed silently at Harven's words, then put another honeyspiced potato into her mouth to delay her own response. He had been speaking like this ever since the funeral, ever since the explosion.

"Honestly, why should they?" continued Harven, who evidently had not touched his meal for at least a few minutes. "Somebody once said that we are just like bacteria in their guts. Oh, they need us all right. They need so many trillion of us just to keep functioning. But why should any one of them miss a few thousand microbes? What difference does it make to them? We shit out millions of microbes every day. Would you miss a few thousand? Would you even notice?"

"I don't mean to sound insensitive," said Relvia, her mouth now empty, "but this line of thinking is not going to bring her back."

"I know you're sensitive, Relvia. And I know you'd understand. You're the only sibling who would listen to a word I say these days. That's why I called you here. Your religion makes it so much easier."

Relvia nodded cautiously. There were a dozen reasons why he would speak the last sentence. She hoped that few were right, and focused on those reasons.

"I know why the liner exploded," Harven blurted out, his tone conspicuously void of emotion, and all the more disturbing for it; flat and wearied, all passion spent and levelled.

"Harven," Relvia responded calmly, "not even the hyperintelligences know why the liner exploded."

"Exactly," said Harven, his voice a faint echo of victory. "Doesn't that make you suspicious? The truth was concealed even from them."

Relvia swallowed. She knew where this was heading. Truth or not, the implications were disturbing. Either this was evidence of delusion beyond healthy bereavement ... or a conspiracy beyond the comprehension of mortals.

"The Nest Mountain knows," said Harven. "She knew from the very first microsecond of the blast."

Relvia sighed more audibly this time, her worst fears confirmed, further implications being far too painful to dwell upon for the moment.

The Nest Mountain was the local godling of the Tiralfia System; the vast orbiting mind that observed all, that controlled the entire local network with every thought, every picosecond of exquisite calculation.

"She kept the information from her own angels," Relvia said slowly and meticulously as she expressed her outrageous thoughts, "yet she told you personally?"