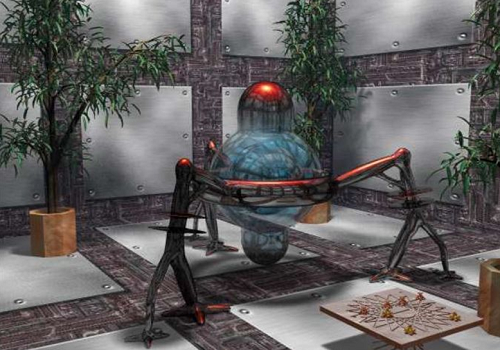 The turingrade cybernetic minds, spun out from strands of evolving computer code, found their own place in civilization. Some wrapped themselves in bodies of metal and carbon and became the vecs, living machines with histories and cultures all their own. Others remained discorporate, living within the ever-growing networks of virtual spaces, computronium nodes, and cybercosms that bind civilization together. Eventually, these were joined by the uploads, humans and other biologicals who had transcribed their thoughts into living algorithms; spinning electron flows and flashing photon beams replacing their old chemical minds. As the Terragens expanded their empires to the stars they found there other thinking beings as well: xenosophonts, aliens with their own histories and their own unique understanding of the cosmos. Species that were old when humanity was born. Species that will be as children when Terragen civilization is old. And on many worlds the enigmatic traces of species long departed.

Cybercosm, The: Name given the sum total of all the various simulations, emulations and virtual reality environments in existence across the Known Net at any given time. Also, a generic term for any virchworld in or apart from the Known Net; a subdivision of The Cybercosm.

Upload: To transfer the consciousness and mental structure of a person from a biological matrix to an electronic or informational or virtual matrix. Also, a term for the being that results from such a process.

Vec: Any one of a diverse grouping of mechanoids of every shape and size and function, with the only commonality being that they occupy a mobile body. The term derives from Hans Moravec, a 20th and 21st century roboticist.

Virchworld: A virtual world; usually at least partially self-contained, or apparently so, may or may not include sentient beings; generally part of a cultural community across computer/cyberspace/matrix networks. The Known Net consists of literally trillions of interconnected virchworlds, but not all virchworlds are well-connected to the physical universe.

As Terragen civilization spread throughout the galaxy, it encountered both living aliens and the remains of extinct alien cultures. Some of these ancient races built vast empires but have since vanished without a trace, and indeed have been gone for millions of years before life even crawled up on dry land on Earth. Those who were expecting a galactic community of civilizations were disappointed. Space turned out to be empty and desolate, and aliens few and far between.

Not one single alien race has been found to be similar in physiology to any metazoan life form that originated on Earth, and the once popular panspermia hypothesis has long been shown to be invalid.

Below are some examples of the races and civilizations (or in some cases, traces of said civilizations) encountered by Terragen explorers.

The Archivists: The oldest known intelligent life; an extinct species or group of species, known only from the enigmatic and undeciphered data stores they created nearly a billion and a half years before the beginning of Terragen history.

Hildemar's Knots: These beings consist of knots of the vortex and charge tubes in the neutronium mantle of neutron stars; they are only a few centimetres across. Successful communication with them is rare, since they regard the universe outside their environment merely as an abstract mathematical problem.

The Jeepers: A cyborg species, apparently evolved from elements of a xenosophont-built terraforming swarm. Their distant ancestors were general-purpose maintenance morphs designed to build and maintain interstellar spacecraft and their cargo of terraforming equipment.

The Muuh: Evolved on a cold low-gravity Titan-like moon somewhere in the Cygnus direction of the Orion Arm, these vaguely arthropod-like beings have a biochemistry based on liquid hydrocarbons. They are slow-moving, and ancient, having achieved spaceflight perhaps 120 to 180 million years ago. It is difficult to distinguish their science and history from their fiction.

The Meistersingers: Sapient beings who consist of a large immobile tree-like organism and a 'choir' of symbiotic crawlers and fliers who serve as its hands, eyes, and ears. Only a few representatives of their civilization have been contacted, but it is believed that they are from elsewhere in the galaxy, and that their species has been extant for millions of years.

The To'ul'hs: The first living and unequivocally sophont species encountered by Terragen explorers. They are native to a hot Venus-like planet with an incredibly deep and dense atmosphere. They resemble four-armed octopi, or perhaps starfish, and are nearly blind; they depend instead on echolocation and an electrical sense. When first encountered, the To'ul'hs had simple technologies despite their complex and ancient civilization, but since contact they have developed their own spacefaring cultures.


To learn more about the xenosophont species encountered by Terragen civilization, click HERE.

Prelude to a Miracle - by Todd Drashner

Part I: I look out from an observation pod, watching the City of Miracles turn beneath me. Behind and 'above' the multi-kilometer bulk of the liner blocks the sun and puts the pod in deepest shadow. To either side brilliant stars, visible even against the reflected glare from the planet below, are other vessels parked in orbit. Traffic is heavy here.

In front and 'below', the world-construct known as the Miracle City forms a landscape of shimmering complexity. Most of the mind-numbing detail that forms the City is blurred to non-existence at this distance but enough still remains to stun the mind. Many of the structures making up the world before me are so large that they are visible even from orbit. Long straight lines crisscrossing the globe designate causeways kilometers across. Huge arcs of shadow, interlocking here and there, are the mark of tower blocks the size of mountain ranges. And along the edge of the world, rising above the atmosphere and breaking up the normal smoothness of an orbital horizon, are the starscrapers. Towers so tall they extend into space.

No one knows who built it. No one knows exactly how old it is. And in a matter of hours I will walk upon its surface.