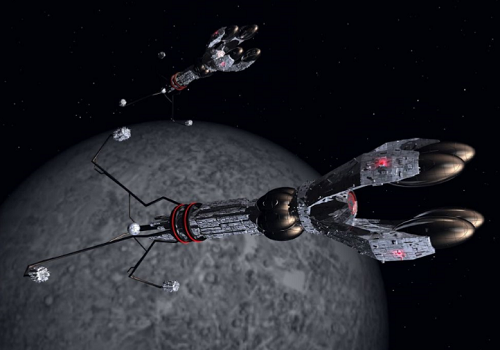 After ten thousand years, Terragen civilization of the Current Era stands upon a pinnacle. The Archai, god-like products of multiple Singularities,have forged a culture unlike any seen before. A subtly controlled yet vital part of these vast intellects, humans and other Terragens now thrive across thousands of light-years of space and centuries of time. Entire worlds and solar systems are remade or utterly destroyed, sometimes by devices far too small to see.

AI God: an archailect, an intelligence so vast as to be almost beyond comprehension, which may be distributed across interstellar distances via artificial wormholes, and with moon, jupiter, matrioshka, and cluster-sized computing nodes.

Caretaker God: An archailect that appropriates a planet, solar system, or region of space, along with all its sentient beings, for conservationist purposes.

Civilized Galaxy: That portion of Terragen civilization that is most characterized by a respect for sentient rights, by transapient intelligences that are friendly to non-transapient life forms, and by an extremely high standard of living that is accessible to most of the sophont beings living there.

Inner Sphere: The most densely settled region of settled space, an irregular ovoid about 200 LY in diameter centered on Sol. The infrastructure and wormhole links have been built up over some seven thousand years. Most AI Gods have their capitals here.

Hinteregions: The region of colonised space between the Inner Sphere and the Outer Volumes. Includes both densely settled old worlds and sparsely inhabited regions.

Outer Volumes: Vast region of mostly lightly settled space (with provincial capitals of greater population and/or technological density) extending outwards from the Hinteregions some 3000 to 6000 LY in every direction. It is thinnest above and below the plane of galactic disc, and most populated in the Cygexba, Carina, Serpens and Perseus sectors.

Periphery: The edge of settled space; the outermost regions of the Outer Volumes. The Periphery is always moving outwards as new worlds and solar systems are discovered and colonised.

Over the course of its history, Terragen civilization has developed a wide range of technologies and techniques for the creation of structures of a size and scale almost unimaginable to the populations of earlier eras. For the people of earlier ages, or those few sophonts from prim or ludd areas who might somehow encounter them, even the smallest macrostructure would be a thing of awe and wonder. It is perhaps a commentary on the state of the current age that most citizens of the Civilized Galaxy see even the largest of such constructions as a normal part of their everyday lives. Some of these structures are created as habitations for ordinary sophonts and others for the purpose of energy or materials generation while others are created entirely by and for the various transapients and archailects.

Below are representative examples of some of the more common types of macro-engineering that exist across the Civilized Galaxy.

Banks Orbital: A megastructure habitat in the shape of a rotating ring with a radius of several million kilometers. The rotation provides gravity, and for a suitable radius also a standard terragen day length. Atmosphere is kept in place using edge shields. Often only part of the circumference is covered with habitat, and further "plates" added when needed or economy allows. Banks Orbitals are named after the first orbital, built in the Gordelpus system (MPA) 2226. This was in turn named after the Information Age fabulist Iain M. Banks who had originally suggested the structure. While they are common in transapientech-based systems, to date only a handful of orbitals have been constructed in lower tech regions. There, the need for massive amounts of magmatter-based structural materials makes them extremely expensive and habitat swarms are usually constructed instead.

Beanstalk: A strong cable (usually polybuckminsterfullerene or some semi-elastic diamondoid) lowered from a geosynchronous satellite and anchored to the ground, often with a counterweight at the outer end to provide some extra tension and stability. A beanstalk provides cheap and simple access to space using elevators. Most developed worlds have a series of beanstalks connecting the surface with orbitals.

Bishop Ring/Space Ring: A rotating ring-shaped orbital habitat, built of woven diamondoid/buckyfibre cable; generally around 2000 kilometers in diameter, with a 500 kilometre wide band, and open to space so that air is retained through centrifugal motion and sidewalls that are tens of kilometers high. Though huge on the scale of typical sophonts, these structures have habitable surface areas one millionth that of Banks Orbitals. Given their smaller size they require no exotic matter for their construction, but on the other hand they must be illuminated artificially from a source at the center of the ring.

Deep-Well Industrial Zone: These heavy-duty industrial and manufacturing zones most often found in the Inner Sphere and most heavily developed areas of the Middle Regions. DWIZs are usually built in orbit around a Jovian or superJovian class world and each zone is built around a small artificial black hole of approximately Ceres mass. Hydrogen is mined from the atmosphere of the gas giant and injected into the black hole, forming an accretion disk. Nucleosynthetic fusion reactions take place within the accretion disk and generate heavy elements that are mined for manufacture into various products, mostly spacecraft hulls and components for large devices and macrostructures such as habitats, catapults and weylforges. DWIZs are used in place of asteroid and lunar mining operations in regions where long term industrialization and development have resulted in the consumption or conversion to habitats of most other space resources. Although heavily automated, deep well zones often support large populations in close proximity due to the large quantities of energy released as a side effect of operations and the major economic transactions that occur as a result of their production.

Dyson Sphere: Usually abbreviated to Dyson; a huge spherical megastructure or shell constructed around a star as a biont or aioid habitat or an ISO support in order to capture the entire energy output of that sun. The structure is made from disassembled planets and existing planetoids. There are several types of Dyson Sphere.

Sunline: Self-replicating fusion reactors are introduced into the upper atmosphere of a gas giant planet. Suspended from large vacuum aerostats, the reactors use nucleosynthesis to fuse the hydrogen of the planet's atmosphere and convert it into heavier elements (mostly carbon compounds), which are then used to construct additional reactors. The energy released during this process is beamed upward to illuminate the moons, asteroids, and habitats orbiting the giant.

Standard Sunline reactors require about a year to self-replicate. Once introduced into a gas giant atmosphere, they are able to produce a complete belt of 'solar' illumination around the equator of a world after only a few decades of operation. If desired, the entire planet can be 'stellified', made to appear like a small star, in less than half a century.

Supramundane Worlds: Supramundane planets (also known as supra-planetary habitats and/or shells) can trace their origins back to the Supra-Jupiter concept of the information age visionary Paul Birch. Because of his early advocacy of Mass Stream Technology (using mass particle beams which encircle a planet or star to support structures above it; by exerting thrust magnetically against these beams (known as dynamic orbital rings), suborbital structures can be suspended at any height.) he is well written of, even in current engineering texts. On a supramundane world, mass beams, in the form of dynamic compression members and dynamic orbital rings, are configured into a framework around a gas giant planet and then used to support platforms, which in turn support a large biosphere. Individual platforms are often extended into bands, which may later be widened into a complete shell. In most ways the details of the biospherics are similar to those of other space habitats. Airwalls at the edges of the platforms keep the biosphere in place until the shell is completed and supporting the shell with orbital rings avoids the need for 'unobtainium'.

Terraforming: Terraforming is a form of megascale engineering that involves diverse technologies and fields of knowledge, including planetology, chemistry, ecology, genetic engineering, and computer simulation. Depending on the nature of the planet, terraforming can require changing the atmospheric composition, pressure, climate, and introducing a self-sustaining ecosystem, using transplanted and genetically modified life forms. Common technologies used in Terraform engineering include gengineered microorganisms, nanites, bombardment by planetoids and comets to alter chemistry and rotation, addition and removal of moons to alter planetary rotation, and the use of large space-based reflectors or shades to increase or decrease radiation received by the planet.

A Minor Demonstration of Power - by Todd Drashner

The ancient fortress was buried deep beneath the roots of the mountain. Built to resist even nuclear attack, it was a vast complex of bunkers and armored chambers overlaid by solid bedrock. Invulnerable, unassailable, and fallen to the State long ago.

Deep within this testament to the States power, a period of questioning was passing.

The man strapped into the interrogation chair was nearly broken now. With drugs, and pain, and merciless persistence the questioners had driven him to a state of near unconsciousness and beyond. And then brought him back again. And again. Now they were feeling rather proud of themselves. Soon now, very soon, they were sure the man would break. Then they would drain him of any likely sounding secrets, perhaps even some of the secrets of the Spacers, before sending his corpse back to those arrogant interlopers with their ridiculous notions: equality of the peoples, equality of genders, worshiping soulless machines.

This demonstration of the State's power, of its ability to touch anyone, even (especially) those who aligned themselves with the outsiders and their heretical ideas, would remind the common people of who actually owned this world. And inject some long overdue humility into the Spacer's dealings with Those Who Rule by Right.

In a single heartbeat, the mountain ceased to be. One moment it was there, a massive, stolid block of immutable stone. The next it had been ripped to fragments and gravel. The pieces of the mountain, and all it had contained, were snatched away in an expanding spherical wave that a moment later reshaped itself into a swirling column of debris extending kilometers into the air. Within that column rock and dust, pieces of concrete, and machines that had been surrounded by concrete spun and spun. And mixed among them were other pieces as well. Pieces that writhed, and shouted, screamed and convulsed. For as vast and complete as the destruction of the mountain had been, as yet no one had died. No one had even been mildly injured. Yet.
Continue